What a difference a year makes. A little over a year ago, Scott Frost was tabbed by Nebraska AD Bill Moos to become the Huskers’ new head coach. The hype of the native son reached new, nearly unreachable, expectations.

Coming off the costly success of Bo Pelini and the costly failure of Mike Riley, Nebraska seemed to finally find the answer.

Something was different this time. The Husker faithful trusted that their former QB could change the culture. After nearly two decades, however, it wasn’t happening overnight.

That showed, as the Huskers went 4-2 over the final half of the season, with close losses at Ohio State and Iowa.

So in the end, how did each position group on this record-setting offense grade out?

The QB battle of the spring and fall ended with true freshman Adrian Martinez as the starter. It looks like that was the right decision. Martinez finished with 2,617 passing yards and 17 touchdowns to eight interceptions. He added 629 yards and eight touchdowns on the ground. Martinez made some freshman mistakes, such as the fumble near the goal line in Columbus, but when your quarterback is All-Big Ten Honorable Mention as a true freshman, it’s hard to complain. Martinez is also sitting at 14 for next year’s Heisman odds.

The lack of true depth behind Martinez is worrisome, as neither Noah Vedral nor Andrew Bunch showed much in their limited playing time. The transfer of Tristan Gebbia didn’t help.

Devine Ozigbo was one of the top stories of the year for Husker football. Many felt he was too out of shape and slow to thrive in Frost’s system. They thought he should leave with Tanner Lee and others. Instead, he stuck it out and worked hard. He finished with 1,082 yards on 155 carries (7.0 average) with 12 touchdowns. He finished with All-Big Ten honors as well. We’ll see him on Sundays.

The Robin to Ziggy’s Batman is easy: Maurice Washington. Washington will have the next couple of years to leave his mark as a Husker hero too, as he was just a true freshman in 2018. Washington finished with 676 yards from scrimmage and four touchdowns on 101 touches (6.7 average). Wait until he spends an offseason with strength coach Zach Duval.

Again, behind the top two, there is not much depth after these guys. Former starter Greg Bell left midseason and none of Wyatt Mazour, Mikale Wilbon or Jaylin Bradley made any impact. The Huskers will need to replace Ozigbo’s role next season.

Stanley Morgan Jr is one of my all-time favorite Huskers. He showed up every game, got better every season and was one heck of a leader. He will be sorely missed, especially after his 2018 season. The second team All-Big Ten receiver finished the year with 70 catches for 1004 yards and seven touchdowns. Morgan is the all-time Huskers leader in receptions and receiving yards and is the only Husker to have a thousand-yard receiving season.

J.D. Spielman was every bit as impressive this season as he was his freshman year. While he did miss the final two games with an ankle injury, he still amassed 818 yards and eight touchdowns on 66 catches, including the Wisconsin game where he had 209 yards alone. Spielman will take over for Morgan next year as the primary receiver and should join him as a thousand-yard receiver.

Behind these two, it was a mixed bag. Mike Williams and Jaron Woodyard will improve, but didn’t have as much impact in their first season in Lincoln as expected. One fun name to note is Kade Warner, who stepped up late in the season and became a starter. He was good at blocking and had some clutch catches. The departure of Tyjon Lindsey was disappointing, if not expected.

While tight ends Jack Stoll, Austin Allen and Kurt Rafdal were not stars by any means, they were a solid trio of tight ends who all have at least two years left in the program. This group will grow and could help take some of Stanley Morgan’s load after his departure.

Stoll in particular was the best of the bunch and turned into a leader for the group. He had 21 catches for 245 yards and three touchdowns. He was strong in blocking as well, making him a good candidate to have a year two leap under Scott Frost.

Cam Jurgens, a big-time prospect from Nebraska, will be transitioning to offensive line, where he should have a major impact the next few years.

I almost feel like I have to give this group two grades. There is the original five from the first half of the season that would easily garner an F. Then, the Boe Wilson for Cole Conrad switch, along with more physicality and tenacity, made this group go from bad to better.

Both left tackle Brendan Jaimes and guard Boe Wilson were honorable mention for the All-Big Ten teams. Along with the leadership of senior guard-turned-center Tanner Farmer and captain Jerald Foster, this group really turned around in the second half of the season.

There were fewer penalties and more lanes for running backs. Pass protection still was not their strong suit, as right tackle Matt Farniok allowed more pressures of his edge than anyone else by a wide margin.

The improvement and coaching from Greg Austin is what really turned this season around. While Martinez, Ozigbo and Morgan get most of the attention, you cannot overlook what his group turned into considering what they were.

The lack of depth, especially once Conrad was benched, really hurt the team as well. While they improved, the first half of the test still counts as part of the grade.

Tune in next week as we grade out the defense and special teams. 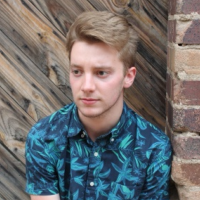 Author Details
Kade Dohmen
My name is Kade Dohmen and I am a student at the University of Nebraska-Lincoln. I have been a member of Husker Nation since I can remember. Unfortunately my first experience at Memorial Stadium was ruined by Iowa State and eight turnovers, but that’s not important. It has been a long time coming since the years of Tom Osborne, but we have the guy now. Along with the Huskers, my fandom extends to the Los Angeles Chargers formerly known as San Diego, the Chicago Bulls, the Tampa Bay Rays and many others (I have a fan of a team in any league just ask). As always, Go Big Red.
[email protected]
×

Kade Dohmen
My name is Kade Dohmen and I am a student at the University of Nebraska-Lincoln. I have been a member of Husker Nation since I can remember. Unfortunately my first experience at Memorial Stadium was ruined by Iowa State and eight turnovers, but that’s not important. It has been a long time coming since the years of Tom Osborne, but we have the guy now. Along with the Huskers, my fandom extends to the Los Angeles Chargers formerly known as San Diego, the Chicago Bulls, the Tampa Bay Rays and many others (I have a fan of a team in any league just ask). As always, Go Big Red.
[email protected]
Latest Posts