In this space on Tuesday, I discussed the Cubs’ signing of starting pitcher Tyler Chatwood, filling a large hole in the starting rotation. The team’s other most pressing need was in the back end bullpen, where Wade Davis is likely to depart via free agency and the Cubs non-tendered Hector Rondon. Theo and Co. moved quickly to address that problem, as well, inking right-hander Brandon Morrow. He is arguably the best (not most accomplished, to be clear) reliever on the market, to a two-year, $21 million deal last week.

Morrow is a well-traveled hurler, having pitched for four different organizations since he was a first-round draft pick in 2006. Most recently, he was the Dodgers‘ primary set-up man in front of closer Kenley Jansen. The 33-year-old has only been a full-time reliever for two seasons, but he was one of the best in all of baseball in 2017, pitching to a 2.06 ERA in 45 games. Cubs fans might remember him from the NLCS, when he pitched 4.2 scoreless frames over four appearances while striking out seven and allowing just one hit.

Morrow has never been a team’s closer before, but that is the role he will almost certainly fill for the Cubs in 2018. His addition to the bullpen probably shifts Carl Edwards Jr. back to a setup role, which he is better-suited for at this point in his career anyway. Morrow will be the Cubs’ fourth closer in four years, following Rondon, Aroldis Chapman, and Davis. It’s been a long time since the Cubs had to worry about protecting a slim lead in the ninth inning. If Morrow comes even close to the standard that trio of his predecessors set, it will be at least two more years before the ninth inning is a time for fingernail-biting again.

Morrow is more than up to the task of closing on the biggest stages, if his 2017 campaign is any indication. Not only was his ERA excellent, it might have actually undersold how good he was last year. His Fielding Independent Pitching (FIP)–a stat that strips away the effects of fielding from a pitcher’s performance and works on a scale similar to ERA–was a minuscule 1.55. That was good for third in all of baseball among pitchers with at least 40 innings of work. That figure ranked behind only elite closers Jansen and Craig Kimbrel.

FIP relies mostly on strikeout rate, walk rate, and home run rate, because those are the three main metrics over which pitchers have total control. Morrow’s strikeout and walk rates were excellent–he whiffed over 5.5 hitters for every one he walked–but it was in home run suppression that he really shone last season. As home run rates league-wide spiked to their highest levels ever, Morrow went the opposite direction. He faced 170 hitters at the big-league level in the regular season and not a single one of them took him deep. That’s right, Morrow did not allow a home run all season.

Of course, that’s unlikely to repeat next year, both because Morrow isn’t an extreme ground-ball pitcher and because, well, home runs happen. Morrow himself allowed three home runs in the playoffs. But that type of elite home run suppression is incredibly valuable as almost everyone becomes a slugger. Basically it’s unlikely Morrow would allow something like this:

Morrow has three different pitches that are all capable of generating swings and misses. His fastball is one of the best in the league, ticking up close to 98 mph on average last season, 17th in all of baseball. That’s almost three mph faster than it was in 2016, his first year as a reliever. His slider was always an out pitch for him when he was a starter and it remained so last year. Nearly out of every four sliders he threw ended in a swing and a miss in 2017 (all three strikeouts on the video above were on sliders).

Morrow also began throwing his cutter again last year when he spent part of the season in the minor leagues (he didn’t make his first MLB appearance until May 29). The cutter is hard, averaging 92 mph, but it moves well down and in to left-handed hitters, making Morrow very effective against lefties. In 2017, left-handed batters slashed a paltry .125/.183/.125 against Morrow and he didn’t allow a single extra-base hit to those batters.

Morrow is not exactly what one would call “injury-prone”, but he does have a history of nagging ailments that have followed him over the last half-decade. At 33 years old, those risks are exacerbated slightly, even more so because the right-hander shouldered a massive workload–13.2 innings with minimal rest–for the Dodgers in the Postseason.

That’s on top of the 63.2 total frames he pitched during the regular season between Triple-A and the major leagues. So, it’s certainly possible that Morrow is slightly burned out heading into 2018. The upside for the Cubs is that they’ve only signed him for two years, so even if he struggles with injuries or relative ineffectiveness, the team is not tied to him for the long term. The most likely scenario seems to be that Morrow throws 50-ish very effective innings per season as the closer, continuing the Cubs’ dominance in the ninth inning. 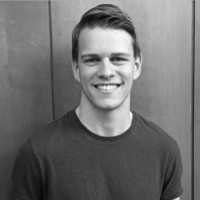 Author Details
Dylan Sinn
I’m a student at the University of Maryland. I’ve been a baseball fan since I was six and started reading the Chicago Tribune sports section every Sunday morning. Before Maryland, I got a degree from Indiana University, where I watched Kyle Schwarber pulverize baseballs for two years. I even interviewed him once in a media scrum so I’m sure he remembers me. If you need someone to tell you who won the World Series in a given year, I’m your man: I have them all memorized (the year you’re thinking of was probably the Yankees).
[email protected]
×

Dylan Sinn
I’m a student at the University of Maryland. I’ve been a baseball fan since I was six and started reading the Chicago Tribune sports section every Sunday morning. Before Maryland, I got a degree from Indiana University, where I watched Kyle Schwarber pulverize baseballs for two years. I even interviewed him once in a media scrum so I’m sure he remembers me. If you need someone to tell you who won the World Series in a given year, I’m your man: I have them all memorized (the year you’re thinking of was probably the Yankees).
[email protected]
Latest Posts