Now that bowl season has officially concluded, with the exception of the big one on Monday night, it’s officially transfer season in the college football world. And so far for the Vols, it’s coming up orange in a big way. That trend continued for the Vols earlier this evening with the addition of grad transfer wide receiver Velus Jones Jr from USC. We know next year’s squad will need several guys to step up at receiver, but the addition of Jones will help soften the blow considerably.

In Velus Jones, Jeremy Pruitt and his staff are getting a speedy wideout that actually considered the Vols during his high school recruitment. Jones was rated as a 3-star in the 2016 class, and visited Knoxville a couple times before eventually joining the Trojans. Even though he was recruited by the previous staff, you know Pruitt is ecstatic to add some serious speed to the roster.

With Jauan Jennings and Marquez Callaway moving on, Jones could carve out some playing time immediately. As a grad transfer, he will have one year remaining and will not have to sit out. In 2018, his most productive season at USC, Jones racked up 24 catches for 266 yards and 2 touchdowns.

He could also see the field returning kicks for the Vols. Callaway will leave a hole there alongside Ty Chandler from this year’s squad. At USC, Jones saw most of his success in the kick return department. His familiarity with Vols CO-OC/WR Coach Tee Martin should help him adjust to whatever his role winds up being.

This also gives the Vols more flexibility with Deangelo Gibbs. The former Bulldog played defensive back but has also been working at receiver for Tennessee. Now, Gibbs could work more at DB and bring more versatility to the 2020 squad. That’s just what I would like to see, nothing is confirmed on that.

Regardless, this is a great pickup for the Vols. 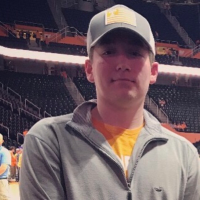 Author Details
Dillon Taylor
I’m from Lynchburg, Tennessee, and have been a Vol Fan all my life. It’s always been a dream of mine to be able to cover Tennessee athletics. Hopefully, I’ll be writing about us having a national championship team soon. In the meantime, it’s always Go Vols!
https://www.armchairmedianetwork.com
[email protected]
×

Dillon Taylor
I’m from Lynchburg, Tennessee, and have been a Vol Fan all my life. It’s always been a dream of mine to be able to cover Tennessee athletics. Hopefully, I’ll be writing about us having a national championship team soon. In the meantime, it’s always Go Vols!
https://www.armchairmedianetwork.com
[email protected]
Latest Posts