Following his decision to enter the NBA Draft in early May, Tyler Lydon has worked out with several NBA teams. The Atlanta Hawks, Charlotte Hornets, Toronto Raptors, Los Angeles Lakers, and Portland Trailblazers are just a few of them.

Each team listed above is missing a young stretch-four that can develop into an NBA stud. While Lydon won’t dominate the league, he can certainly mold into a consistent scoring threat both off the bench, or in a starting role.

One workout can go a long way. Shortly after Lydon worked out with the Lakers, it was reported that Rob Pelinka, their General Manager, was impressed with Lydon.

Lydon is projected to be a late first-round pick. However, his potential is through the roof. Don’t be surprised if he turns heads next season, and ends up being labeled as one of the main steals of the draft following his rookie season.

Lydon, who is coming off his sophomore campaign with the Syracuse Orange, has an unusual skill set and shooting ability.

The 6-foot-9 Forward averaged over 13 points and almost nine rebounds last year in college basketball’s toughest conference, the ACC. Lydon solidified himself as one of college’s best stretch-fours over the last two years, shooting 40% from three.

Lydon is an extremely versatile scorer that can torture defenses through driving, cutting to the basket, hitting the mid-range jumper, or comfortably pulling up from three whenever he has an open shot.

The one concern that mock drafts and scouts raise is Lydon’s weight, and that he won’t be able to transition to life in the NBA, especially on the defensive end.

There have been countless occasions when the league has seen players bulk up over the summer after they are drafted, and there is no doubt that Lydon can do the same.

Lydon’s post moves made many college forwards look foolish over the past two years, and he will definitely continue using them at the next level.

His offensive skillset has, and should continue to make NBA scouts drool, but his defense is just as impressive.

Tyler averaged at least 1 steal and 1.4 blocks per game during his time with the Orange, and should serve as an adequate defender at the next level.

Playing in Jim Boeheim’s famous 2-3 zone only benefited Lydon, as he was able to cover almost every position, and get used to defending the paint. 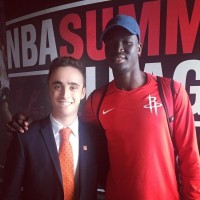 Vols (Collectively) Urinate Down Leg against Auburn, get Arkansas Wednesday in Fayette-nam